Dr Anthony Turton – Environmental Expert has a high media profile, most notably regarding the issue of acid mine drainage (AMD) and water quality arising from waste water mismanagement.

He works into the mining space where he is part of a team developing a new investment case for Brownfields site rehabilitation. Now available to book through Speakers Inc 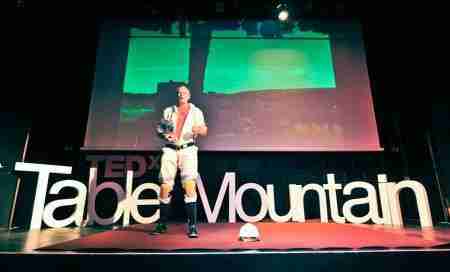 He can speak on leadership challenges arising from decision-making under conditions of uncertainty and inherently high risk.  As a soldier-poet he is active among the veteran community encouraging  the catharsis of recognition for the role played by all, irrespective of which side they fought on.

He is a nation-builder and story-teller, deeply embedded in his roots as a 12th generation African.

–    In 2009, he earned the Habitat Council Award for his ‘principled stance in defence of the public to be informed of the truth … and the courage that he displayed in publishing the state of our water resources, thereby refusing to compromise his scientific integrity’
–    In 2010, he earned the Nick Steele Memorial Award, given to him by SAM Miller in recognition of his work on AMD as a strategic national problem
–    In 2012, he was given the Green Globe Award in 2012 in recognition for his work in sustainability.
–    In 2015 his work was published in the first anthology of bush war poetry in the book “Nubes Belli” (Clouds of War).
–    His book Shaking Hands with Billy forms the basis of many of the leadership lessons he can speak of.

Dr Turton is available for professional engagements as a speaker or facilitator where sustainability and corporate leadership are required. Follow on Twitter

Admin - 21 November 2014 0
Kevin Gaskell - Inspired Leadership is an energetic and passionate leader  with a record of driving growth, and delivering substantial improvements in...