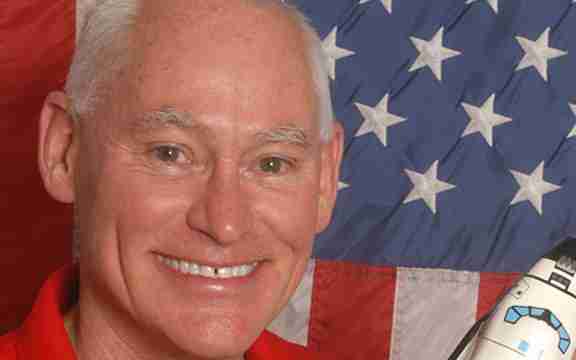 Colonel Mike Mullane has established himself as an acclaimed professional speaker on the topics of teamwork, leadership and safety.  He has educated, entertained, inspired and thrilled tens of thousands of people from every walk of business and government with his incredibly unique programs.

Colonel Mullane was born September 10, 1945 in Wichita Falls, Texas but spent much of his youth in Albuquerque, New Mexico, where he currently resides. He was a child of the space race and in the late 1950’s embarked on his own rocket experiments in the deserts near his home.

Upon his graduation from West Point in 1967, he was commissioned in the United States Air Force.

As a Weapon Systems Operator aboard RF-4C Phantom aircraft, he completed 134 combat missions in Vietnam.

He holds a Master’s of Science Degree in Aeronautical Engineering from the Air Force Institute of Technology and is also a graduate of the Air Force Flight Test Engineer School at Edwards Air Force Base, California.

Mullane was selected as a Mission Specialist in 1978 in the first group of Space Shuttle Astronauts. He completed three space missions aboard the Shuttles Discovery (STS-41D) and Atlantis (STS-27 & 36) before retiring from NASA and the Air Force in 1990.

Mullane has been inducted into the International Space Hall of Fame and is the recipient of many awards, including the Air Force Distinguished Flying Cross, Legion of Merit and the NASA Space Flight Medal.

Since his retirement from NASA, Colonel Mullane has written an award-winning children’s book, Liftoff! An Astronaut’s Dream, and a popular space-fact book, Do Your Ears Pop In Space? His memoir, Riding Rockets: The Outrageous Tales of a Space Shuttle Astronaut, has been reviewed in the New York Times and on the Daily Show with Jon Stewart. It has also been featured on Barnes and Noble’s 2010 recommended summer reading list.

Mullane has held a lifelong passion for mountain climbing, averaging nearly 500 miles per year of backpacking in the mountains of the West. Since age 60 he has summited Africa’s highest peak, Mt. Kilimanjaro; the glaciered peak of Mt. Rainier; and thirty-five of Colorado’s 14,000-foot peaks.

Colonel Mullane has established himself as an acclaimed professional speaker on the topics of teamwork, leadership and safety. He has educated, entertained, inspired and thrilled tens of thousands of people from every walk of business and government with his incredibly unique programs.

Mike and Donna Mullane married a week after his graduation from West Point in 1967. The couple has three children and six grandchildren.